Transit fraud in the Windy City: Dead people not only vote, they ride the bus!

Chicago, of course, is a byword for municipal corruption.  The city's public transit services are no exceptions to the culture of misappropriation, pay-offs, and other crimes. 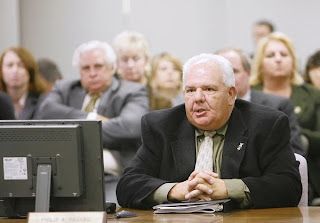 Earlier this year the executive director of Metra killed himself -- appropriately, it was suicide by train -- after the revelation of major improprieties.

Last summer the governor and legislature created a new office of  the Illinois tollway inspector general.


that would give the state's executive inspector general the job of keeping an eye on Chicago-area mass transit agencies.

Under the bill, the state office would investigate corruption, fraud and waste at Metra, Pace, the Regional Transportation Authority and oversee the Chicago Transit Authority's current inspector general.

Now comes word that dead people are riding the bus, according to the Chicago Tribune:

The Regional Transportation Authority found that at least 164 senior free-ride cards remained in use after the person to whom the card was issued had died. One card alone racked up as many as 1,400 free trips, officials said.

Although this is a relatively small amount of revenue and ridership, RTA officials fear more widespread abuse of the free-rides program is taking place.

Besides people using a dead person's card, RTA officials believe the program is also being abused by people improperly using cards issued to other seniors or to low-income disabled individuals who are eligible for free rides under the state's Circuit Breaker qualification.