Why do some Canadians have rail envy? 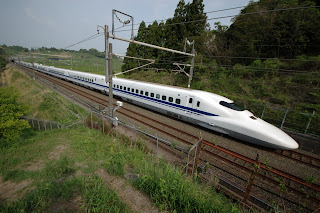 From CTV in Winnipeg today:


It's been 40 years since Japan unveiled its first high-speed rail systems, but Canada is languishing with a rail system from the 1950s that one rail activist calls a national "embarrassment."

"Who can defend what we have? The public has to say ‘Enough is enough' and tell our government that we need . . . modern passenger rail like the rest of the world has," Paul Langan of the group High-Speed Rail Canada told CTV.ca.

Which nation should be embarrassed?

Of course, Canada has an deplorable nanny-state, just like other Western countries.  But its people still enjoy a relative high level of freedom.  And it boasts the lowest public sector debt among the G8.

Canadian taxpayers should count themselves fortunate that they don't "enjoy" the credit-addicted societies which can travel about the countryside at 250 km/hr in phallic-shaped trains built by companies like Siemens ("the global leader in high speed rail")...because public debt size does matter.
Posted by Editor at 2:48 PM