Nissan Leaf: Foolish Socrates and a PIIG both satisfied 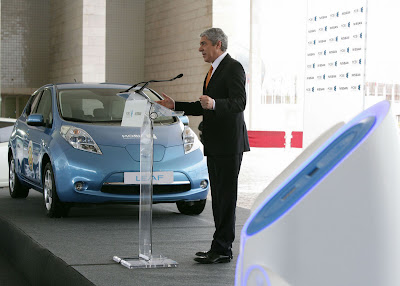 Portugese PM José Sócrates became (in the words of autoblog.com) the "first world leader to take deliver of [a] Nissan Leaf."  Nissan's news release is here.  The PIIG leader said

"We are extremely pleased to be introducing the electric vehicle in Portugal. After 3 years of collaborative work between the Government, public entities, the corporate consortium which developed the MOBI.E solution and Nissan, we have achieved the first smart, built-in charging network on a national scope, therefore we are the first country to welcome electric vehicles. By combining in a pioneer manner our commitment to renewable energies, the implementation of the smart charging network and the introduction of electric vehicles, Portugal will be in the lead of the transition to a more sustainable future."


Fitch downgraded Portugal's long-term and local currency ratings by one notch to A-plus, with a negative outlook, adding to a drumbeat of negative news on sovereign debt in Europe.

Portugal has moved into the eye of the storm in Europe's debt crisis on concerns about its public finances, with investors worried it will be next to take a bailout after Ireland and Greece.