Checkpoints and roadblocks: Coming soon to a national security State near you? 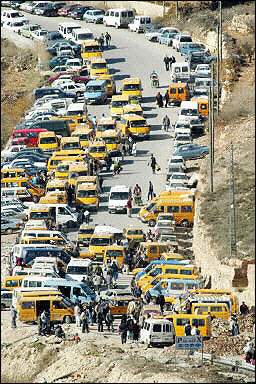 America's heroes -- the FBI and Department of Fatherland Security -- are ever vigilant for automotive IEDs this holiday season, reports ABC News:


But this year, which ends amid a heightened concern over terror, is a little different.  A Department of Homeland Security bulletin sent to law enforcement nationwide Thursday says that federal authorities worry terrorists will try to rattle Americans by attacking during the holidays, and lists concerns including car bombs, trucks ramming crowds and a Mumbai-style small arms attack.

[Photo of Israeli checkpoint near Ramallah: AFP]
Posted by Editor at 2:55 PM