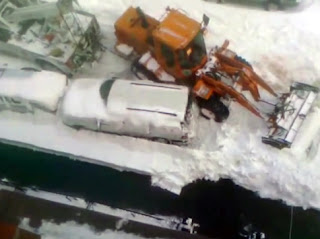 Addendum to today's earlier post ("NYC snow job III"): The Ford Explorer being indifferently damaged by New York city workers in the now-famous YouTube video was not a privately owned car after all (though it might have been).  It is in fact owned by the City of New York itself.  The Daily News reports:


"It could had been completely avoided," said the wife of Eugene McArdle, 53, whose city-owned SUV was crushed. "It was a poor decision."

McArdle is the emergency liaison for the city Department of Housing Preservation and Development and needs the vehicle for his job, a spokeswoman said.

The SUV is a 1995 Expedition with 95,000 miles on it that the agency inherited from the city Department of Environmental Protection.

"We're happy no one was hurt," the spokeswoman said. "It's just a car."

But the towed front-end loader nailed McArdle's personal car, the Toyota parked in front of the Explorer, in the process!

What did Hizzoner have to say about this incident at a news conference today?


[A]nyone who suffered property damage should file a claim with the city.