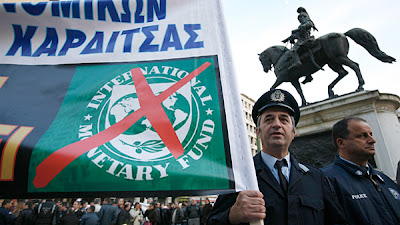 The English-language edition of Ekathimerini describes today the chaotic picture of public transportation, supposedly a public good funded by Greek taxpayers, in Athens in the days leading up to Christmas:


Workers on all forms of public transport except city buses are to walk off the job today in a continued protest against government plans to streamline debt-ridden public companies that is to intensify in the countdown to Christmas, causing increased congestion in the streets of the capital.

Only buses will be operating today, on a restricted schedule of 9 a.m. to 9 p.m.

Tomorrow and Friday – which is Christmas Eve – there will be no transport between noon and 4 p.m. as workers on all modes of public transport stage a walkout.

The action will peak on Wednesday when all public transport will be halted in the latest of a string of 24-hour strikes. On the same day, the General Confederation of Greek Labor (GSEE) and the main civil servants’ union ADEDY have called on members to join a three-hour work stoppage starting at noon, and have organized an anti-austerity rally outside Parliament at 1 p.m. which is expected to aggravate congestion in the city center.

The workers are protesting reforms streamlining loss-making public transport companies which foresee a 10 percent reduction of all wages in excess of 1,800 euros and the transfer to other positions in the civil service of some 1,500 workers. The reforms – part of an ongoing austerity drive – were voted through Parliament last Tuesday, along with more legislation relaxing labor laws. The changes passed into law, despite vehement criticism by opposition politicians and by certain ruling PASOK deputies. One Socialist MP, Evangelos Papachristos from the northwestern port of Preveza, was expelled for refusing to vote for the measures in Parliament.