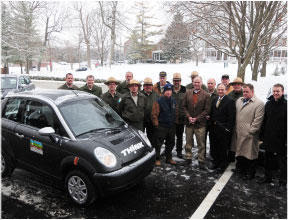 Indiana governor Mitch Daniels is electrified at the prospect of Indiana-assembled EVs, according to UPI:

The vehicles designed in Scandinavia, were assembled at a THINK manufacturing plant in Elkhart, Ind., and are designed to fit into fleet vehicle sales, THINK Chief Executive Officer Barry Engle said.

"Our delivery today is part of a larger effort to help transform the U.S. light-duty vehicle fleet from one that is mostly dependent on imported oil to one that is fueled entirely by domestically produced electric energy," he said.

"We believe that the coming era of electric cars, like the THINK City, will find its home here in Indiana," he said.