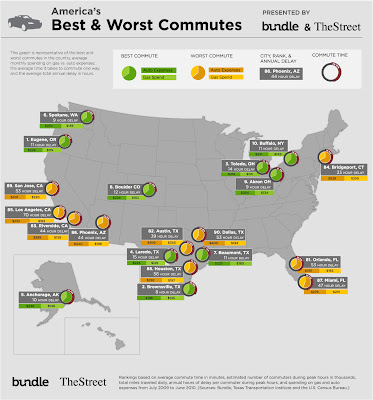 The Street and Bundle jointly commissioned a study conducted by Chicago-based Center for Neighborhood Technology to judge the best anbd worst commuted in America.  Eugene, Oregon, was judged as having the best overall commute for motorists, and Dallas, Texas, the worst among 90 US metropolitan areas.

The CNT is, of course, an "urban livability and sustainability" think tank.  It has just developed a "transit-oriented development typology guidebook" for example.  The CNT pities those poor commuters who live in


"drive-'til-you-qualify zones" — those who moved outside city limits to save money and find cheaper homes to buy, so they could afford a mortgage.

Might some of these people perhaps have made conscious choices to move to the suburbs or exurbs?  Commuters calculate every day the economic trade-offs of gas prices, vehicle wear-and-tear, time spent in traffic, toll fees (where applicable), parking cost (if any), etc.  Many of them gladly pay the added costs so that they don't have top depend on corrupt public transit services (like those in CNT's own backyard), send their kids to failed schools, etc.

Of course, a true free market in highways would allow commuters even better ways to assess the costs of where to live and work, and when, where, and how to commute.  And it would provide markedly better ways to get them where they're going.
Posted by Editor at 7:56 PM