Bruce McCall: NYC streets for "almost every purpose except driving" 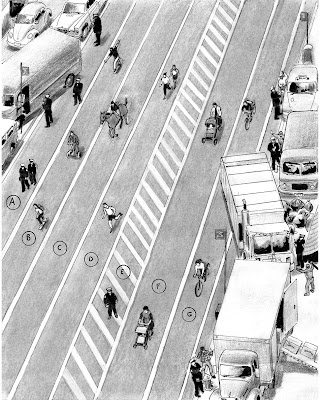 Op-art by Bruce McCall in the Gray Lady:

Those lanes eating up one or two traffic lanes were only a start: City crews are now out collecting overtime as they convert New York’s widest major thoroughfares into Mayor ’s dream of a vehicle-free paradise — and all for no more than the cost of a few thousand buckets of white paint!

Under the new system, sidewalk parking for all vehicles becomes not only mandatory but also illegal — a one-two punch expected to fatten the Department of Finance’s coffers by an estimated $13 million per day in added traffic summonses!

Cleared of all vehicular traffic, streets can now be sliced into seven lanes serving almost every purpose except driving.

Read here for a key to his seven lanes.