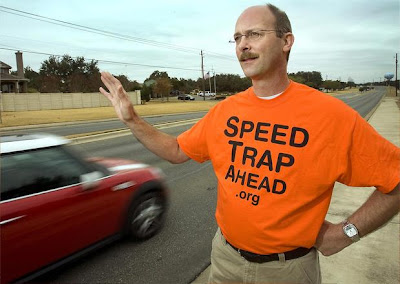 Lance Mitchell of Lakeway, Texas, is an enemy of the municipal State and true freedom fighter.  His website is speedtrapahead.org.  His purpose:

His story is told by the Austin American Statesman:


"People often ask if I was angry about getting a speeding ticket in my past," Mitchell, now 47, said. "But I've had one ticket in the last 25 years. I'm an excellent driver."...

"My father was a truck driver, and he always flashed his lights to warn people of a radar trap, and I always did that myself," he said. "So it was just curiosity."

Eventually, he wondered if he couldn't also display a sign warning drivers of an upcoming radar trap as an interactive way to promote his site.

"I discovered while it was illegal to warn people of an enforcement action, that didn't apply to the traffic code," Mitchell said. "So I thought, 'Great! Now I can hold a sign!'"...

Mitchell figured he was performing the same public service as a real police speed trap, but at a significantly lower cost to the driver.