España may ride out of town on a (high-speed) rail 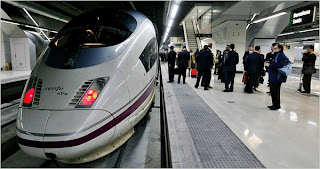 So Spain is a rail leader and a charter member of the PIIGS.  Any correlation here?


Zapatero says the new route, which will take paying passengers from Sunday, "increases confidence and shows the world that Spain is a prosperous country."

The king said that it enabled Spaniards "to look beyond the crisis and economic difficulties."

The Spanish economy slumped into recession in late 2008 due to the collapse of a property bubble that has caused the unemployment rate to soar to 20 percent, the highest in the euro zone.

It posted zero percent economic growth in the third quarter and Madrid has introduced tough austerity measures in a bid to reduce chronic debt.

Economists say the country is too small in population to make a high-speed network viable, but the government says it creates jobs -- 136,000 for the Madrid-Valencia line -- and cuts carbon dioxide emissions.

Further lines are planned or under construction that would boost Spain into second place globally with 5,525 kilometres of high speed tracks, behind China the world leader with 13,134 kilometres but ahead of pioneer Japan with 3,625 kilometres.

It's worth recalling the warning of EU Commission president Barroso last June when he said that "Democracy could ‘collapse’ in Greece, Spain and Portugal unless urgent action is taken to tackle the debt crisis."  When the destitute people of Spain revolt against their political leaders and banksters, perhaps one could say that Democracy will be run out of town on a rail.