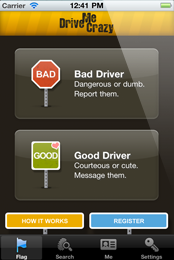 We naturally get angry when we see inconsiderate or unsafe drivers on the road.  In extreme circumstances, one might be tempted to call 911.  Philip Inghelbrecht has developed DriveMeCrazy, a voice-activated app to help drivers pass on info about alleged bad drivers to local authorities and insurance companies.


Anyone can write a ticket, even pedestrians and cyclists. No one is safe from being tattled on. Even if you don’t use the program, which went live Wednesday, you can’t opt out of being flagged if someone thinks you’re driving like a schmuck. Inghelbrecht is emphatic in saying he sees no privacy issues with the app and insists the end of road-going anonymity can only improve safety.

“People think they can do bad things on the road because they think they can get away with it,” he said. “I believe that driving is one of the most public acts that you could ever do. One small mistake can impact the lives of those around you.”

Inghelbrecht compares DriveMeCrazy to government programs that encourage reporting drunk drivers or gross polluters. If drivers know they’re being watched by smartphone-wielding vigilantes, Inghelbrecht figures they will refrain from aggressive behavior for fear of getting flagged. His goal is to cut the number of motor vehicle accidents 1 or 2 percent by 2020, a figure that would represent 700 lives saved annually.

“That would be the most beautiful outcome, commercial aspects aside,” he said.

Those commercial aspects could be huge.

“The ability for monetization is actually really strong,” he said. “I don’t want to get into too much detail, but essentially if people report driving behavior of their fellow motorists, you’re building a database of driver information.”

It’s like vehicle-history reports, but with thousands of reports on the behavior of individual drivers. “That’s obviously interesting to the insurance companies, who are truly information starved,” he said.

Insurance companies rely on buying your driving record from your state’s motor-vehicle bureau, and they use predictive proxy data such as marital status, homeownership and ZIP code to determine your risk. Inghelbrecht sees insurance companies having great interest in a driver-behavior database that, if predictive of claims data, could help set rates.

Already, Inghelbrecht is looking at putting together a pilot program with insurance companies, though the industry’s interest — and how much driver-reported data regulators might allow them to use — is uncertain. Nationwide Insurance offered an opinion in an e-mail to Wired.com.

“Auto-insurance rates are filed with state regulators and must include consistent definitions for the activities that will vary costs for consumers,” the company said. “Because each individual who would observe another driver’s performance would have a unique perspective about what might be safe behaviors, it would be difficult to use information reported by the general public.”

Not quite a ringing endorsement, but Inghelbrecht isn’t worried.

“Our data is never as official or authoritative as a police report,” he said. So how can he assure accuracy? Volume.

But what about abuse?  What happens to a U.S. citizen's presumption of innocence?

This technology could inconvenience or even destroy lives.  Is that beautiful too, Phil?

Instead of a version of CARFAX on drivers, it seems closer to the Nazi or Soviet practice of children spying on their parents.

Jeff Glucker of autoblog.com points out:


While the idea of being able to report someone for driving like a jackass sounds great, there's little question that this will lead to abuse. What if someone were out to get you and reported you simply because they felt like it? Perhaps the person who didn't get that parking spot you ended up with is feeling particularly angry. Maybe the other driver didn't see your blinker even though you had it on for the last 15 minutes. This is DrivemeCrazy's inherent flaw.

In addition to empowering virtual snitches, DriveMeCrazy also lets users reward good driving, as well as "flirt" with other DrivemeCrazy users. We now await the first report of a DriveMeCrazy user getting a real ticket for using a mobile device to serve up a cheesy virtual ticket while driving.

Of course, once TheHood gets cell phone use banned in automobiles, you'll self-report yourself to the police after you've squealed on a lousy driver!
Posted by Editor at 7:32 PM