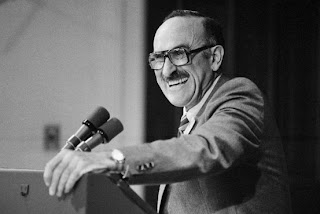 17 October 1917 – 27 December 2010
He was a self-described liberal Democrat who believed in the best interests of the consumer and transformed what had been a socialistic system in air travel.  He steadfastly believed that complete deregulation was a lot better than a little bit.

Would that we had his like to advocate for deregulation of surface transportation!