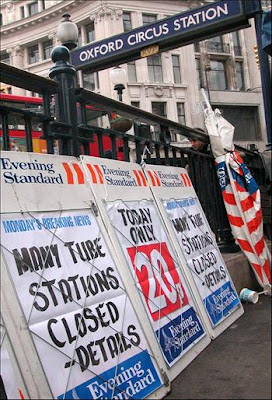 
Shoppers flocked to the traditional Boxing Day sales in London on Sunday, undeterred in their search for a bargain by a strike on the Underground system that caused most services to be suspended.

Oxford Street, the main shopping artery in the capital, was heaving with shoppers by lunchtime, after some people had camped overnight outside Selfridges department store to ensure they were first in the queue.

Similar scenes played out across Britain as retailers slashed their prices by up to 75 percent, many of them hoping to make up for slow trading earlier in the month caused by snow and cold weather.

Bargain-hunters in London were forced to drive or get the bus to the shops as Underground drivers went on a 24-hour strike in a dispute over holiday pay.

Members of the Aslef trade union voted to walk out after transport chiefs refused their demand for triple pay and a day off for working on December 26 -- the day after Christmas being a national holiday in Britain.

The strike caused the part or full suspension of every Tube line, meaning that the train network will have effectively been closed for two days -- it was also shut on Saturday for Christmas.

Mayor of London Boris Johnson said Aslef's demands were "monstrous" and accused the union of breaking a long-standing agreement on working hours that included conditions for national holidays.

ASLEF's members have to ask their leaders: What we struck and nobody noticed?