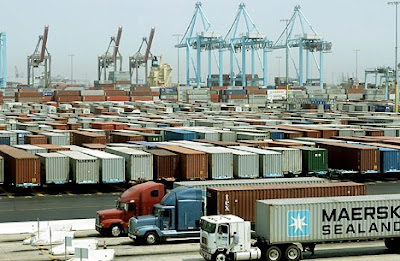 
Many [Port truckers] have gone from being owners of polluting rigs to leasers of late-model "clean" trucks, valued at $100,000 to $200,000 — beyond what most drivers can afford to purchase. The new vehicles yield diminished carbon footprints, thanks to green technology. But, drivers say, the new models also cost at least 50% more to operate than their exhaust-spewing predecessors, on top of the lease payments to trucking companies...

Besides paying leases that often exceed $1,000 a month, drivers say, they must absorb higher costs for insurance, registration, service and other expenses for the trucks, which feature technology like diesel particulate filters. Maintenance generally must be done at certified shops or dealers, not by the cut-rate mechanics who once serviced their rigs.

The lease process, drivers say, means that much of the financial burden — including paying for servicing needed to maintain trucks' green capabilities — falls on drivers. Environmentalists argue that the fleet may soon turn dirty again as cash-strapped drivers skimp on maintenance charges that rise as the vehicles age.


The city invested millions of dollars in subsidies and incentives to encourage companies to purchase green trucks and accept the drivers.

As employees, drivers would be paid by the hour and could be eligible for benefits like health insurance and retirement. And it would be the responsibility of employers, not drivers, to pay for the upkeep and costs such as fuel, registration and insurance.

However, the trucking industry has mounted a robust challenge to the plan in U.S. District Court; the provision requiring that port drivers be made employees remains enjoined.

Pushing hard for the L.A. plan was organized labor, long a key supporter of Villaraigosa, himself a former union organizer. The Teamsters view the so-called employee-driver mandate as a way to organize an industry in which union membership has plummeted since a 1980s wave of deregulation.

This is merely another example of "green" policies camouflaging other political agendas and State-sponsored thuggery.