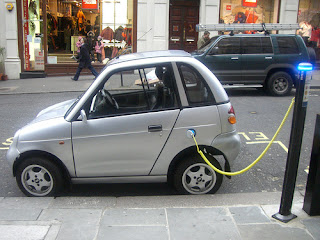 The "green" Cameron government has revealed details about its £43million subsidy program (adopted from its Labour predecessor) for electric car purchases and infrastructure beginning January 1.   Customers will receive a rebate up to  £5,000 for one of nine eligible vehicles (only three of which are presently on the market).  Five regions of the UK will be given grants to install recharging stations.  The transport secretary, the Rt. Hon. Philip Hammond, gushed at the announcement:


“Government action to support more affordable cars and more local charging points means we are on the threshold of an exciting green revolution – 2011 could be remembered as the year the electric car took off.”

But even Hammond admitted that "green" cars aren't necessarily green, depending on how the electricity is generated in the first place:


"There's no point in switching the car fleet to running on electricity if the electricity emits vast amounts of carbon dioxide."