"How do you go on if you've killed your own child or grandchild?"

So asks Janette Fennell, president of Kids and Cars, who was trotted out today to endorse the latest nanny-state auto safety regulation proposal: mandatory back-up cameras in all new US cars by 2014.  In (only partial) defense of US DOT sec'y The Hood, the NHTSA was required to draft a proposed rule by a 2007 act of Congress. 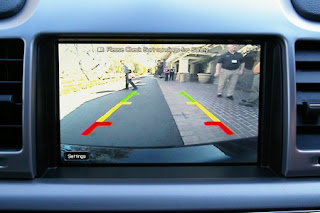 
"There is no more tragic accident than for a parent or caregiver to back out of a garage or driveway and kill or injure an undetected child playing behind the vehicle," said Transportation Secretary Ray LaHood. "The changes we are proposing today will help drivers see into those blind zones directly behind vehicles to make sure it is safe to back up."

The proposal, issued by the National Highway Traffic Safety Administration (NHTSA), would expand the required field of view for all passenger cars, pickup trucks, minivans, buses and low-speed vehicles with a gross vehicle weight rating of up to 10,000 pounds so that drivers can see directly behind the vehicle when the vehicle’s transmission is in reverse. NHTSA believes automobile manufacturers will install rear mounted video cameras and in-vehicle displays to meet the proposed standards. To meet the requirements of the proposed rule, ten percent of new vehicles must comply by Sept. 2012, 40 percent by Sept. 2013 and 100 percent by Sept. 2014.

As the Associated Press notes:


Automakers have been adding video cameras and object detection sensors to vehicles to help drivers when backing up or parking. But the backup cameras are still optional equipment on most vehicles and only about 20 percent of 2010 vehicles have the cameras onboard.

The proposal is expected to be completed next year after a public comment period. Under the plan, 10 percent of the vehicle fleet will need to meet the standards by the 2012 model year, followed by 40 percent in 2013 and all new vehicles by 2014.

Apparently this is the Obama administration's new industrial policy for the partially-nationalized domestic auto industry: More US DOT mandates making new everyday cars more unaffordable for more sheeple who can barely consider buying a new car because they are frightened about losing their jobs.  Ya think the UAW will like this?