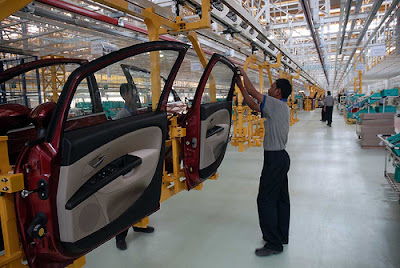 As far as there is unhampered capitalism, there is no longer any question of poverty in the sense in which this term is applied to the conditions of a noncapitalistic society.  The increase in population figures does not create supernumerary mouths, but additional hands whose employment produces additional wealth.  There are no ablebodied paupers.  Seen from the point of view of the economically backward nations, the conflicts between "capital" and "labor" in the capitalist countries appear as conflicts within a privileged upper class.  In the eyes of an Indian or a Chinese coolie the American automobile worker is an "aristocrat."  He is a man who belongs to the 2 per cent of the earth's population whose income is highest. Not only the colored races, but also the Slavs, the Arabs, and some other peoples look upon the average income of the citizens of the capitalistic countries -- about 12 or 15 per cent of the total of mankind -- as a curtailment of their own material well-being.  They fail to realize that the prosperity of these allegedly privileged groups is, apart from the effects of migration barriers, not paid for by their own poverty, and that the main obstacle to the improvement of their own conditions is their abhorrence of capitalism.

Ludwig von Mises, Human Action: A Treatise on Economics, chapter XXXV "The Welfare Principle versus the Market Principle" (1949; reprinted as the Scholar's Edition: Auburn, Alabama: Mises Institute, 1998) 832-3; digital edition here (courtesy of the Mises Institute).  [A revised edition changes the bolded sentence to read: In the eyes of the Asiatics, the American automobile worker is an “aristocrat.”]