A new commodity to watch for amidst the collapsing UK economy: road grit 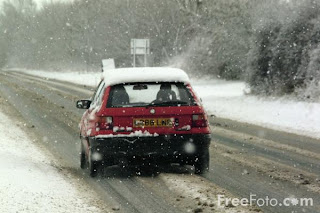 From the BBC, in the snow-pummeled UK:


A councillor has condemned the "outrageous theft" of road salt and grit by a gang who robbed a depot.

"It is amazing how selfish some people are," said Oldham Councillor John McCann, Cabinet Member for Environment.

A gang of 10 men arrived at the council depot claiming to be sub-contractors but threatened a council workmen who challenged them.

Greater Manchester Police studying camera footage of the raid and are trying to trace the gang's vehicles.

Equipped with a mechanical loading shovel, the gang who had arrived [in] a Range Rover, a truck and a van, loaded the salt before fleeing the depot despite an attempt to block them by a council staff member.

"This is an outrageous incident and a theft of vital stocks that are used to keep ordinary citizens safe on the roads," said Mr McCann.