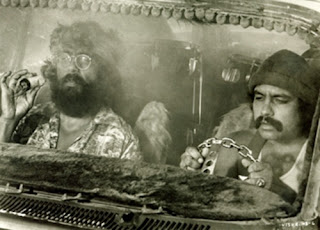 Sucking on the teet of the federal and state governments has given the American Road and Transportation Builders Association (ARTBA) an oral fixation.  Now the road builders' trade association is sticking something else in its collective mouth: a big doobie of delusion.

The association released its annual forecast this week.  It predicts a 4.4% contraction in highway and bridge contruction in 2011; praises the Obama stimulus; and laments the miserly ways of state governments unsure of federal largesse for roads and bridges.

The ARTBA forecast references "the aftermath of the recession" -- since this industry wants to believe politicians detached from reality and economically illiterate financial Mainstream Media in thinking that we are out of the fiscal quicksand.  It also:


assumes that the U.S. will return to modest economic growth between 1.8 and 1.9 percent for 2011 through 2015. Increases in material prices and project costs are expected to be in line with general inflation at about two percent.

Modest economic growth of almost 2% in real terms over the next five years...plus inflation at 2%.  Hey, man, give me another hit.
Posted by Editor at 5:25 PM