VW has just introduced this electric concept car of what a London black cab of the future might look like: 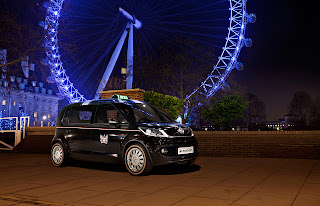 
"In the future, mobility in city centres will be restricted by low emission zones that you can't enter with private vehicles, so in such cities taxis are about mass mobilisation"..

Volkswagen and others in the industry often see government initiatives as business opportunities, and electric motoring subsidies are no different.