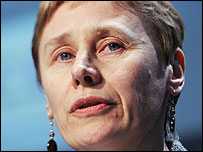 Lin Hommer was announced on Monday as the new Permanent Secretary at the Department of Transport; in other words, come January she will become the new civil service head of the UK transport ministry.

Her selection, "following an open competition," is -- how shall we say? -- curious.  She is a lawyer and reputedly skilled bureaucratic manager and infighter.  She was the top administrator in Birmingham before allegations over election administration fraud in 2005 drove her from local government.  (Or, as a writer for the Birmingham Post described her yesterday, "The woman who presided over Birmingham’s 'banana republic' vote-rigging scandal."

So she "made the leap from local government to central," finding a new job as head of (in its current nomenclature) the UK Border Agency.  Controversy followed her there, though, too.

Two things make her appointment so interesting.  First, while in Birmingham she was believed by the Tory-LibDem coalition which took control of local government, to have private sympathies with Labour, which eventually become not so private.  Yet a Tory-LibDem coalition national government is now installing her in a top civil service post.  Second, as the head of the agency "responsible for securing the UK border and controlling migration in the UK" (UK Border Agency's mission statement), she becomes the latest example of Leviathan Government in the West putting essentially a cop in charge of transportation.