Quotation for the day: Alistair Cooke 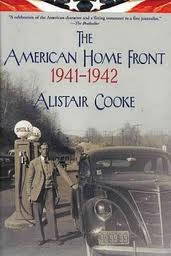 As I drove around the sprawling suburbs of Los Angeles, it became impossible to avoid or forget the Angelenos' resentment of their own Japanese.  The Santa Anita Racetrack had been made the reception center for thousands of American-Japanese suddenly confronted with the status of prisoners of war.  Along the highways, and along placid streets, you would constantly see signs, "Truck farm for immediate sale".  "Nursery garden, 20 years old, must sell".  Enterprising whites were moving into farms they had bought for a song.  A Japanese family, faced with their compulsory deportation into the High Sierras before the end of the week, offered me a 1942 Buick De Luxe for five, maybe 400 dollars.  They were the last Japanese I saw anywhere on the coast...

The drive out to Manzanar from Los Angeles is, under the right conditions, as beautiful and dramatic as any in the state.   These conditions would be a spring day, a pleasant companion, plenty of time, and the obvious return to freedom.  None of these conditions existed for the thousands of Japanese-Americans who at the beginning of March 1942 took two blankets and a few personal belongings specified by the Army, and drove out at dawn in a long file of automobiles, northeast of US 6 toward the dry valley floor of the High Sierras...

I drove away from Manzanar none too proud of the showing we had made in running the first compulsory migration of American citizens in American history -- not counting the Indians.  How slippery seemed the solid abstractions we preach when you journey 6,000 miles and find democracy in a concentration camp.