Holy smokes! Credit crunch is so bad, even the Tata Nano is unaffordable 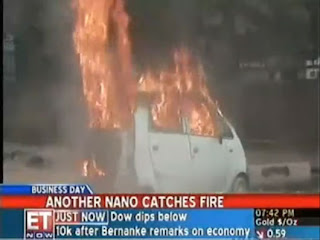 
Sales of Tata Motors' Nano, the world's cheapest car, plunged by 85% in November compared with a year earlier, the Indian carmaker has said.

It blamed the slump on the difficulty potential customers had in accessing loans to buy the car.

However, analysts pointed out that a series of fires in the Nano, as well as price rises, had also affected sales.

Or do the cars automatically combust whenever Bernanke speaks?

[Screengrab photo from ET Now channel: The India Car]
Posted by Editor at 9:58 AM