Ghosn predicts 10% of new autos sold by 2020 will be electric. But he needs the State's help 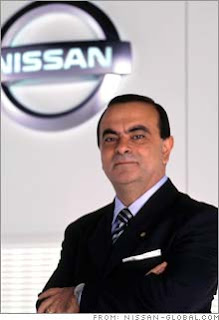 
Ghosn also said that, by 2020, electric cars would constitute a tenth of global auto sales. Let’s just say that’s an optimistic projection that I haven’t seen matched by any prognosticators, except perhaps for the Electrification Coalition. And EC’s numbers – 75 percent of light-duty miles traveled by 2040 could be electric miles — came with an asterisk (and note the “could”).

CEO Robbie Diamond told me that EC’s prediction is dependent on realization of its Roadmap, which calls for a high level of U.S. government spending. A bill calling for an initial $500 million in EV subsidies was to have been addressed in the lame-duck session of Congress, but so far it’s languishing as taxes crowd out other issues.

Ghosn recognizes the need for government subsidies. He’s the most prominent member of the Electrification Coalition, and he said when it was launched, “The widespread acceptance of zero emission cars will require more than the efforts automakers can provide on their own. Public and private collaboration will be the key to mainstream acceptance.”...

I see a million North American EVs as a stretch goal for 2020, and Ghosn’s prediction that the Leaf alone will do that many in six years as wildly hopeful. I’d like to drink some of his magic elixir.

Didn't Carlos once say, "Incentives are not strategy"?
Posted by Editor at 8:56 PM