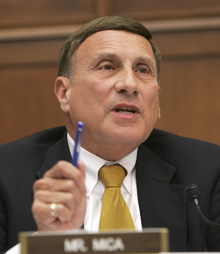 New US House transportation committee chairman John Mica (R-Florida) was characterized yesterday on this blog as very similar to his big-spending Democrat predecessor, Jim Oberstar.  It took just one day for this truth to be proven by another example (courtesy of the Tampa Bay Business Journal):


Thursday’s unexpected infusion of an extra $342 million for Florida’s high-speed rail project appears to have warmed U.S. Rep John Mica to extending the project to Tampa.

The Orlando-area Republican has previously expressed doubts about building the line west of Disney World. His main reason: Hillsborough County’s failure to fund the proposed light rail connection to the high-speed rail station in downtown Tampa.

But Thursday’s announcement seemed to melt that opposition.

“This is good news for the Tampa Bay area,” said Mica, chairman of the House Transportation and Infrastructure Committee. “This means we could probably construct the line (to Tampa) without taxpayers underwriting the cost of it.”