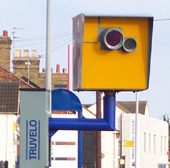 The Royal Automobile Club Foundation for Motoring Ltd released a study today on speed camera use and effectiveness in the UK, arriving at the present time of "crisis in funding for speed cameras."

If there is one subject which divides drivers like no other it is speed cameras. Are they a mechanism for saving life or a method of raising revenue? Have they, as some contend, actually increased the casualties on our roads?

The study's author, Richard Allsop, finds [p. 40] among other things that:


Deployment of speed cameras leads to appreciable reductions in speed in the vicinity of the cameras, and substantial reductions in collisions and casualties there...

Recent data from road safety partnerships, while not comprehensive, indicate that there continue to be substantial reductions in fatal or serious casualties in the vicinity of cameras, and that decommissioning of speed cameras across Great Britain could well result in about 800 extra people being killed or seriously injured each year.

Allsop disputes a popular contention that the cameras are now a cash-cow for the State [p. 38]:

The cost of enforcement is thus borne by the detected speeding offenders in the form of penalties, leaving a modest margin of surplus.

However, public reactions today to Allsop's research suggest that many of the British driving public don't buy this argument.

The Conservative-Liberal Democrat coalition government ended funding to local governments for speed cameras as part of its dramatic and desperately needed austerity budget.  The BBC quotes government reaction to the study:

He said: "We ended central government funding for new fixed speed cameras because we don't believe we should dictate to councils that they use them as the default solution in reducing accidents.

"It is not true however that the government has cut all funding for road safety, rather we have removed ring-fencing from local authority grants so that councils are able to set their own priorities.

"We would expect that road safety would remain a priority for local communities and that local spending would reflect that."

Capital costs for speed cameras are not the issue, but the operating costs for exising ones.  For example, Oxfordshire turned off 161 fixed and mobile speed cameras on August 1 after £600,000 was slashed in the council's budget.  (Though efforts are being made to reactivate them there.)

Of course, there's nothing wrong with speed cameras per se if they were part of a private road management system, which consumers could decide to use or not.  But in the UK, as in other countries, they are a really a tool of State behavioral control and revenue coercion as applied to government monopoly roadways.  The RAC Foundation's study doesn't refute that.