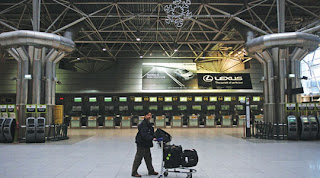 How nice they waited until President Obama and the eco-warrior elites (NATO officials driven around in electric cars) finished their summit last weekend.

Portuguese public sector workers are striking today -- a mass general strike.  The usual suspects, too: port, airport, and transit workers, among many others.

The transport sector was crippled, with no flights taking off or landing at any airport. More than three-quarters of train services and 60 per cent of bus services were cancelled, operators said.

Lisbon’s metro system was closed for the day, along with the ferries linking the two sides of the Tagus.

In protesting modest and overdue pension austerity last summer, remember that French strikers forced the closure of refineries (and, consequently, gas stations) all over the country and even blocked public access to roads.  So when someone argues that the owners or operators of private roads (or any other transportation mode) could not be trusted to always allow travelers access, the response can be: the State cannot be trusted to allow access either.

[Photo of deserted Lisbon International Airport: Francisco Seco/AP]
Posted by Editor at 1:34 AM