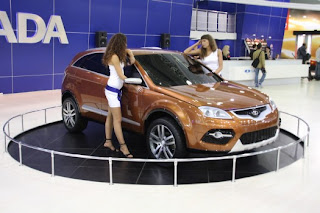 
The Russian government will allocate 13,5 billion rubles for the implementation of the cash-for-clunkers program in 2011, Deputy Prime Minister Sergei Ivanov said on Thursday.

Under the program, anyone is allowed to turn in a 10-year-old vehicle and receive a coupon for a 50,000 ruble discount for the purchase of a Russian-made car.

Since the program began in March, the Russian government has reportedly expended an estimated 21.5 billion rubles (US$700 million) to prop up domestic car demand, primarily to benefit AvtoVAZ's Lada brand (in which Renault-Nissan is likely to take a greater stake).  For example, August car sales rose 51% over July.
The rubles-for-clunkers extension into next year demonstrates the Putin government's continued significant economic interventionism, despite claims to the contrary.
When Prime Minister Putin announced an earlier extension in July, the Avtostate agency suggested that the program had already outlived its purpose:

Deputy Director of the Avtostat think tank Sergei Udalov said that while the utilization program had its advantages, Russia's car market had begun to recover separately from it.

He said its extension, which was approved by Putin on Thursday, would not aid large Russian carmakers except AvtoVAZ, for which it is, indeed, a life and death question, as it was hit hardest by the global financial crisis.

Udalov said there was little sense in extending the program, and that the age of the cars should be raised to 20 years and the amount of the discount decreased.

[Photo of Lada C-Cross: http://www.nextconceptcars.com/concept-cars/lada-c-cross-concept/]
Posted by Editor at 1:24 AM