A bridge too far? Or government road building too far? 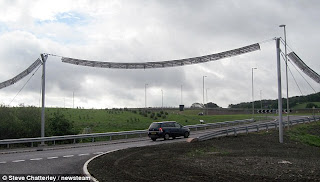 A couple of months ago, news outlets throughout the UK and internationally picked up on the news oddity of £190,000 ($250,000) being spent for walking bridges for dormice then under construction over the new Church Village bypass near Pontypridd, Rhondda Cynon Taf, in south Wales.  The expenditure by the Welsh Assembly and the local government council were derided as politically correct, EU Habitats Directive required enviro-kookiness, and wasteful.  As one woman-on-the-street was quoted by the BBC as saying:


I find it quite hilarious really, with this recession and the money that we need elsewhere.

The bypass, which opened in September 2010 to relieve congestion on the A473, happens to run through a major habitat for the rodents, explains Robert Jones Parry of the Wildlife Trust of South Wales:


[W]e have decided to put a road through their habitat. And what that does is isolate the dormice. So all of a sudden this one big population of dormice can no longer breed and then what happens then?

(The "we" being government decision makers.)

A spokewoman from the Taxpayers' Alliance said of the dormice walkways:


They may have good intentions but this bill is unjustifiably large and in these straitened times they should have explored less expensive ways of protecting these creatures.

Perhaps the same should be said in the first place for the costly government road project "in these straitened times" in the UK.
Posted by Editor at 8:44 AM