Quotation for the day: Adolf Hitler 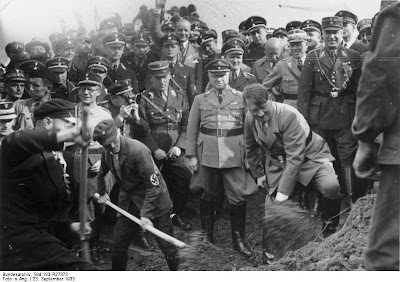 Hence we are ﻿building roads with the German worker that are nowhere else to be found...You can all be proud of the fact that you have had a part in accomplishing this task, whether as engineers or as laborers.  In it, you are creating a work which will stand even after a thousand years have passed.  It is a work which will bear witness to yourselves, even if not as much as a speck of your dust will still exist on this planet.  These roads will live on.  It is magnificent and wonderful to live in such an age and be able to take part in such work.  In the future, every single German will come to profit from this work, just as was the case with the railroad.  In the space of but a few decades, these roads will witness a vast amount of traffic in which the entire Volk [people] will figure.  Millions of our Volkswagens, the large buses of our KdF [Strength through Joy] excursions, and the huge volume of long-distance traffic and tourists will roll along these roads.