He make his face shine upon thee 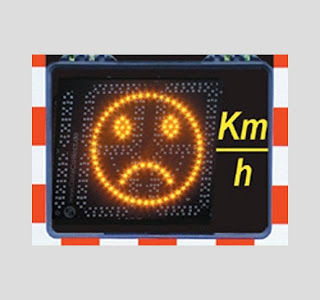 
Developed as non-aggressive means of speed limit enforcement, SID is seen as the "Friendly" face of community and site speed education.


The units are no-confrontational and serve as an aid to calming road traffic.  Features of the sign include a ‘smiley face' that rewards drivers for complying with the speed limit and a ‘sad face' for those which are not.

Is it just me, or does SID's seemingly kid-friendly (or simpleton-condescending?) premise encourage sheeple motorists and other viewers to look up -- literally -- to Authority for its smiling approval?

SID is being introduced into a local traffic management in a number of UK localities.