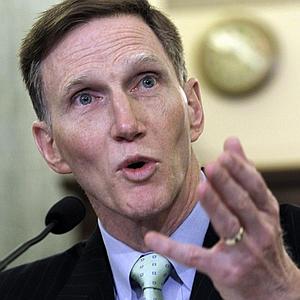 Authoritarians usually announce their next steps for anyone to hear -- even though few hear or want to believe.


Protecting riders on mass-transit systems from terrorist attacks will be as high a priority as ensuring safe air travel, the new head of the Transportation Security Administration promises.

...John Pistole told USA TODAY that some terrorists consider subway and rail cars an easier target than heavily secured planes. "Given the list of threats on subways and rails over the last six years going on seven years, we know that some terrorist groups see rail and subways as being more vulnerable because there's not the type of screening that you find in aviation," he said. "From my perspective, that is an equally important threat area."

Then riders of the Port Authority Corporation (PATCO) in the Philadelphia are got a feel of random pat-downs in early September.  (Note the NBC affiliates very un-GE like online headline: "Random pat-downs turn PATCO into police state"!)
Further, TSA agents tingled to their very finger tips at a Greyhound terminal in Orlando on October 21:

Bryce Williams wasn't expecting to walk through a metal detector or have his bags screened for explosives at the Greyhound bus terminal near downtown Orlando.

But Williams and 689 other passengers went through tougher-than-normal security procedures Thursday as part of a random check coordinated by the U.S. Transportation Security Administration.

The idea is to keep off guard terrorists and others who mean harm, thereby improving safety for passengers and workers. There was no specific threat to the bus station on John Young Parkway south of Colonial Drive...

Although the TSA is best known for its agents at airports, the agency's Visible Intermodal Prevention and Response, or VIPR, teams stage periodic operations at bus and train stations, ports and other transportation centers. They began work in December 2006.

Thursday's daylong event was the first at a Greyhound station in Florida, said John Daly, TSA security director for the Orlando region...

On Thursday, 50 officials from agencies including TSA, Orlando police, the Orange County Sheriff's Office, and U.S. Customs and Border Protection patted down passengers.

Next, Knoxville bus riders and Greyhound employees enjoyed a random search on October 28, prompted by nothing:

TSA agents say a search of the downtown Knoxville Greyhound bus station Thursday evening was not prompted by a terror threat.

The agents said it was just a random check.

The TSA's Visible Intermodal Prevention and Response or VIPR did the search. The agents worked with the Knoxville Police Department, the Knox County Sheriff's Office, and Tennessee Highway Patrol.

Despite the furore over November's airport pornoscanners and feel-up policy, don't be surprised for Gruppenführer Pistole to expand the TSA "state within a state" into train and bus stations permanently.  If the US treasury could support it, we would soon be treated to "random" traffic checkpoints before long.
[Photo of John Pistole: New York Post]
Posted by Editor at 2:27 AM