GM, IPO, and the UAW: alphabet soup with a bad taste

Given their talking points by the Obama Administration and the Fourteenth Floor about last week's IPO, most of the Mainstream Media and subservient automotive media fed us a steady diet  about how "GM is back," the "new GM" is turning around decades of bad management with "exciting" products like the (economically unviable) Chevy Volt, and how American taxpayers are starting to recoup "their investment."

Leave it to the Washington Times to shed necessary light on how the UAW was advantaged in the IPO mockery.  It quotes Glenn Reynolds, CEO of CreditSights and a longtime critic of the GM bailout, as follows: 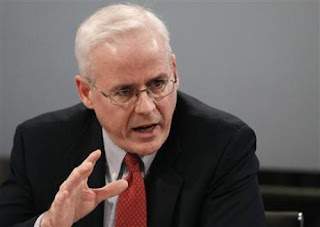 "It gives outraged flashbacks to the old GM bondholders," who remain mired in the bankruptcy proceedings and are unlikely to recover more than 30 percent of their investments, Mr. Reynolds said.

He compared the deal to the corrupt crony capitalism in Russia under President Vladimir Putin.

The White House "took a page out of the Putin political asset reallocation and reward system" when it engineered the deal, he said.

Mr. Reynolds also described the White House deal as a combination of "Boss Tweed on steroids" and "Hugo Chavez on meds," as far as the bondholders are concerned.

[Photo of Glenn Reynolds: Reuters.]
Posted by Editor at 12:20 AM