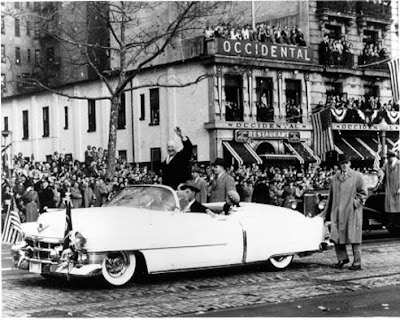 I am personally convinced that, in a number of fields, this Administration will have to come forward, at a reasonably early date, with a constructive program that will be designed to meet, in a well-rounded and imaginative way, the constantly increasing needs of a growing population.
Our cities still conform too rigidly to the patterns, customs, and practices of fifty years ago. Each year we add hundreds of thousands of new automobiles to our vehicular population, but our road systems do not keep pace with the need. In the average city today, many of our streets become almost useless to traffic because of the necessity of home owners for using them for parking.
While this entire subject of vehicular traffic is but a small segment of the great program that must attract our attention, there is nevertheless no reason why we should not proceed to its thorough study so as to have it ready for inclusion into a broad plan to be developed later.
To the greatest possible extent, all these projects should be locally controlled and owned. Ownership could be by municipality in many cases, and by states in others. Some of them could be privately owned. Still others could be under the control of an Authority something on the order of the New York Port Authority.
In appropriate cases, I think the Federal Government could well guarantee bonds, but we should not create a new demand for governmental funds as such. There might be some occasional departures from the rule--but only for reasons so unusual as to make their exceptional character obvious to government.
While we were still in New York, Mr. Buckner gave me a preliminary paper on this matter. I think I already handed that document to you.
I request that you be my representative in undertaking with interested departments of government the kind of study herein roughly indicated. I should like to have plans crystallized and developed so that significant parts of it could be initiated without completion of the entire plan, but with the certainty that the part started will fit logically and efficiently into the whole. By and large, the timing of construction should be such as to have some effect in levelling out peaks and valleys in our economic life.